Notable 20th & 21st century
​Botanical Artists​
​of the past

The Victoria Medal of Honour (VMH)

The Victoria Medal of Honour (VMH) is awarded to British horticulturists resident in the United Kingdom whom the Royal Horticultural Society Council considers deserving of special honour by the Society.
​​
​These have included botanical artists

The VMM has been conferred on:

The watercolour painting of Lilies is from a period when Elizabeth Blackadder was exceptionally popular. Collectors had to be well connected or move very fast to buy one of her paintings. I don't think I ever saw an unsold painting in an exhibition of hers at this time. In this particular instance, Dr Sherwood recognised the painting being exhibited in a gallery from inside a taxi - and bought it! I'm a huge fan and was very pleased to see this painting because although not "strictly botanical" she's one of a few contemporary artists who paints the 'being' of a flower. I used to salivate over them every year at the RA Summer Exhibition and loved her approach to composition. (I should perhaps explain I've have prints of her paintings above my bed for years!)​
British Artists in the Shirley Sherwood Collection - a review and a timeline

Jenny Brasier GM (1936-2020)
​No formal training. Encouraged to paint plants and flowers in her later years by Wilfrid Blunt. She was awarded five Gold Medals (1982, 1988 1989, 1994, 2000) from the Royal Horticultural Society and The Linnean Society gave her the Jill Smythies Award in 2002 for works in watercolour on both paper and vellum. Her artwork is included in 'The Art of Botanical Illustration' (1994 version) and the collections of the Natural History Museum, Victoria & Albert Museum, the Royal Horticultural Society and the Shirley Sherwood Collection. She was one of two contemporary botanical artists whose work was included in the 'Picturing Plants' Exhibition at the Victoria and Albert Museum in 1995. Her small paintings on vellum appeared in a number of exhibitions at the Shirley Sherwood Gallery. She exhibited internationally as well as in the UK - including at the Smithsonian Museum and the Hunt Institute in the USA. Jenny was one of the botanical artists who contributed to the Highgrove Florilegium for the 60th Birthday of HRH Prince of Wales. She was a Past Chair of the Eden Florilegium Society and a Founder member of the Society of Botanical Artists in the UK.
See also Jenny Brasier (1936 - 2020)
Sally Crosthwaite GM (2002) SBA SFP (?-2017)
Won an RHS Gold Medal Winner for 8 paintings of Iridaceae;  member of the Society of Botanical Artists and a Founder Member of The Chelsea Physic Garden Florilegium Society. She has work in the collections of The Royal Botanic Gardens of Kew, The Chelsea Physic Garden, The Highgrove Florilegium, Royal Horticultural Society and The Hunt Institute (USA)
​
Jeannie Foord (dates ? 19th/20th century)
A Glaswegian botanical artist working at the end of the 19th century and beginning of the 20th century whose schematic style was influenced by Art Nouveau. Her images render the features of plants simply. The plants are outlined and include cropped views of stems and blooms in the manner of Japanese woodblock prints. Her floral prints are produced as lithographs and flat colour tints are applied using the pochoir process (colour is added by hand using a stencil) by the Paris firm of E. Greningaire. They are signed and dated within the plate with a chop mark. This device also references Japanese printmakers and was widely used by artisans and artists of the Arts and Crafts and Art Nouveau movements. Her botanical designs were used by artisans in the Arts & Crafts movement in decorative applications in stained glass, fabric, woodwork and cement sculpture. 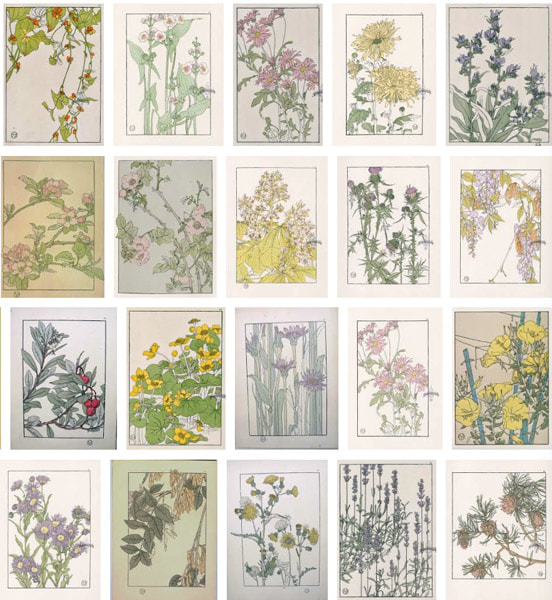 Images of floral litographic prints by Jeannie Foord
REFERENCE:
Rear Admiral (John) Paul (Wellington) Furse CB, OBE, GM (Feb. 1964, Nov. 1964, 1965, 1968) (1904-1978)
Born on 13 October 1904 at Frimley, Surrey, England and educated at Dartmouth. His naval career saw him promoted to Rear-Admiral, Furse retired from the Royal Navy in 1959. He made botanical expeditions (to Turkey and Iran, 1960, 1962, and to Afghanistan, 1964 and 1966_ and collected bulbs many of which he brought back to RHS Wisley. Vice-Chairman of the RHS Lily group, he won four Gold Medals for his botanical paintings in the mid-60s and was awarded the Victoria Medal of Honour in 1965.
REFERENCE: 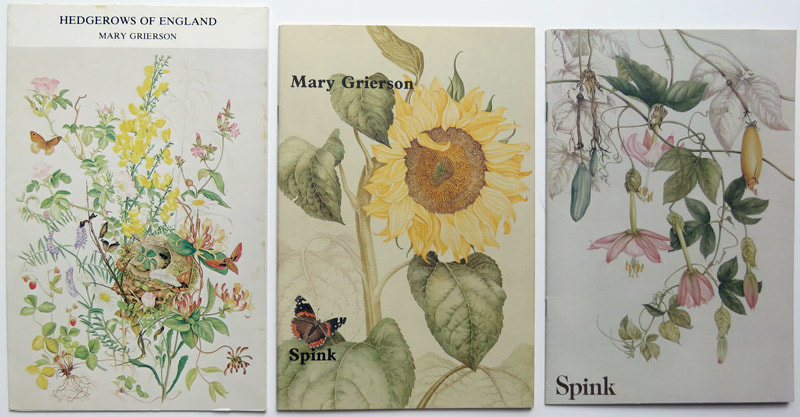 My copies of three catalogues from solo exhibitions by Mary Grierson
Read my blog post The bonus of buying second-hand botanical art books to find out how I came to be the owner of these three catalogues for solo exhibitions by Mary Grierson.
My copy was bought online and came in a slipcase and arrived with three catalogues of solo exhibitions by Mary Grierson! Such are the delights buying second-hand - and that's how you have to buy this book as it's out of print. If you can buy 'new' it will be very expensive.
'Painting Flowers in Watercolour' by Coral Guest
HIGHLY RECOMMENDED: Coral Guest was the Flower Painting Tutor at the Royal Botanic Gardens Kew from 1991 to 2002.
In 1997 she taught some of the first Botanical Master Classes around the world at the request of Shirley Sherwood.
​This is the book which includes some of her techniques which she taught to students attending those classes.
REFERENCES:
Rory McEwen The Colours of Reality by Martyn Rix 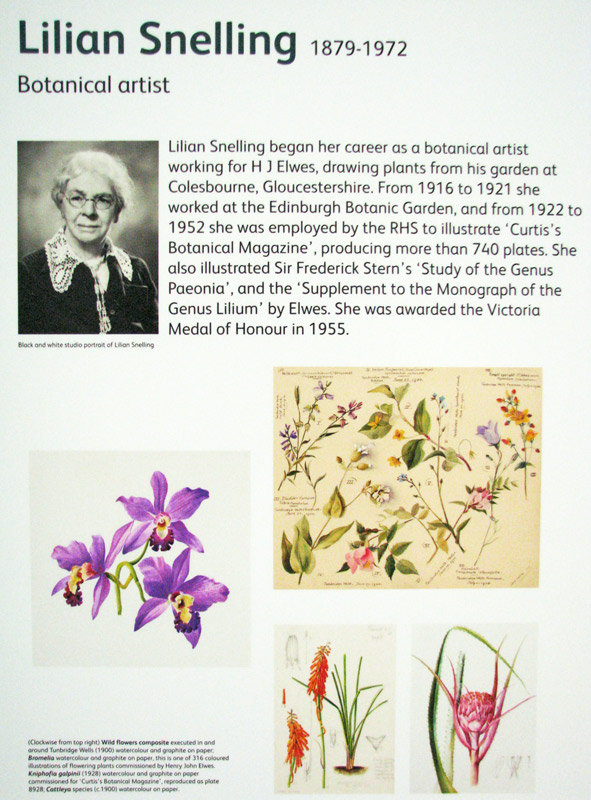 I first came across Lillian Snelling in a display about notable female botanical artists at an RHS Show in March 2011.
Jessica Tscherepine - born in Sussex, England in 1938, but lived for most of her life in the USA. See North America

Wendy Walsh (1915 - 2014)
Born Wendy Felicité Storey in Bowness-on-Windermere in Cumbria, England. She lived and worked in Ireland for more than 50 years. As a child she began painting age six and studied privately under the animal painters Cecil Aldin and Arminell Morshead.  She married a soldier (Lieutenant Colonel JF Walsh) and travelled the world, studying Chinese Chinese ink techniques in Japan.  In 1958 on his retirement they moved with their three girls and settled in Lusk, Ireland. In 1999 they retired to Kildare.
Wendy Walsh exhibited widely at an international level, and received many honours and awards, including gold medals from the RHS in London (in 1980, 1988, 1994). She illustrated over a dozen botanical books, and designed postage stamps for the postal service of Ireland, and for Kiribati (formerly the Gilbert Islands). She produced 96 plates for An Irish Florilegium Volume 1 (1983) & Volume 2 (1988). “An Irish Florilegium” won a bronze medal for '"Most beautiful book in the world” at the Leipzig Book Fair.  She received a number of honours.  In 1997, she was given an Honorary D Litt. by the University of Dublin (Trinity Collage). In 1998 she was made a life member of the Royal Dublin Society. On March 1st 2014 she was awarded an honorary membership of the newly founded Irish Society of Botanical Artists.  Two days later, on 3rd March 2014, she died at Abergavenny, Wales, a few weeks short of her 99th birthday.  See the video below of an interview with Wendy Walsh.
The Wild and Garden Plants or Ireland by Wendy Walsh

"...her deft hand is able to illustrate as many textures through watercolor application as there are in nature, from the fuzziest leaves to the crinkliest of husks. Because of her meticulous yet graceful style and impeccable attention to detail, her works are among the most requested of the collection for study by artists and admirers of the medium."
Pistoia | Hunt Institute

Leslie Carroll Berge (1959-2017)
b. Massachusetts 1959. Degree in Art History, Painting and Drawing from Bennington College, Vermont. MA in IllustrationAt Art Institute of Boston. Freelance artist since 1981. Participated in early botanical art courses organised by Dr Sherwood. Exhibited in the 7th International Exhibition at the Hunt in 1992. Work in the Shirley Sherwood Collection. Renowned for her paintings of cycads. Her painting of the female cones of the cycad, Encephalartos woodii (extinct in the wild) featured on the front cover of "A Passion for Plants" and was reproduced in the Washington Post
​
Lee Adams (1922-1971)
Studied botany at the University of North Carolina at Chapel Hill and Rollins College.Well regarded in relation to his portrayal of his watercolour paintings, oils and murals of tropical and exotic vegetation including palms plus related animals and birds. He was both a naturalist and a self-taught artist. Commissioned to produce illustrations and paintings for the Fairchild Tropical Botanic Garden in Coral Gables, Florida. He represented the United States at the Flower Artists of the World exhibition in London in 1968. Retrospective exhibition of his art at Thrasher-Horne Center for The Arts in Orange Park, Florida in 2005.
Priscilla K S Fawcett (1932-2012)
​Botanical artist at Fairchild Tropical Garden, Miami, Florida for nearly 25 years, between 1965-1989. She drew just over 1,000 botanic illustrations while at FTBG.  Her illustrations have now been formally curated as The Priscilla Fawcett Collection at the The Bertram Zuckerman Garden Archive, Fairchild Tropical Botanic Garden Center for Tropical Plant Research. Born and educated in England, she had no formal training as an illustrator. However she was introduced to Dr. William T. Stearn (1911-2001) who acted as her mentor and taught her botanical drawing (1963-65). She was the principal illustrator for: Flora of the Bahama Archipelago (1982) and the Flora of Florida Project. She also provided the illustrations for The Biology of Trees Native to Tropical Florida (1980) and The Botany of Mangroves (1986).  In 1993 she was awarded the Robert H. Montgomery Medal for distinguished achievement in the field of palms and cycads. She exhibited in a number of prestigious international exhibitions of botanical art including at the Hunt Botanical Library in 1968.
This is a list of American Botanical Illustrators | wikipedia

The Demontes' work stands at the intersection of two Brazilian traditions: representational painting inspired by nature and naturalistic drawing, executed by explorers and scientists.
Clarke Bruno 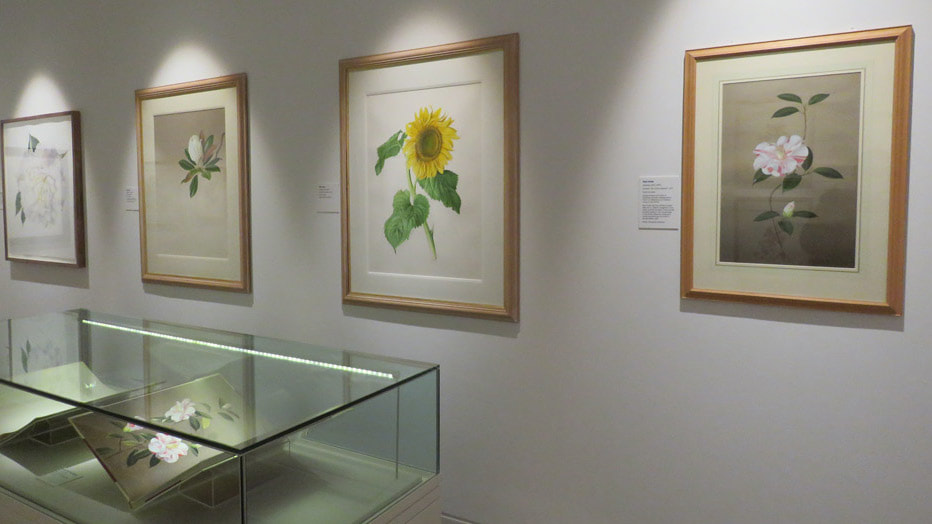 In June 2004 New Zealand Post released five stamps of her artworks depicting garden flowers. Two of the flowers had Taranaki connections a Rhododendron ‘Charisma’ from Pukeiti and a Magnolia ‘Vulcan’ bred by Felix Jury at Tikorangi. A sixth painting of another Jury magnolia, ‘Black Tulip’, featured on the first day covers.
Obituary: Susan Worthington - BA. Dip. A. Hons. Tchg. (1944 - 2022)

Margaret Tredgold (1910 - 2012)
​She illustrated the 1953 edition of Robert Martineau's Rhodesian Wild Flowers. She also illustrated Food Plants of Zimbabwe published in 1986. Following her husband's death she relocated to Somerset in 2004. (Obituary)

​Thakur Ganga (Rai Sahib) Singh (1895-1970)
Born in India. He joined the Dehra Dun Forest Institute in 1911 and served as a Senior Artist for 30 years until his retirement in 1945. In 1931 he took long leave for a year and travelled to London for formal training as an artist at the Slade School of Art. He was made Rai Sahib ( a title of honour) for his contribution to art. Court painter to Yadhavindra Singh, Maharajah of Patiala. Ganga Singh was engaged by the Maharajah in 1942 to reproduce his collected flora in watercolour drawings. He became a permanent member of His Highness' staff and painted over four hundred watercolours over a period of twenty years.