​Raymond Booth was a botanical, wildlife and natural history artist of international renown
​who lived a reclusive life in Yorkshire and exhibited with the Fine Art Society.

Nothing delighted him more than the freedom to put a few basic requirements in a backpack and explore the countryside, sleeping under hedgerows or in woodland, and developing his intimacy with bird and animal life. – Peyton Skipwith

His approach to botanical illustration
​

The process of making his paintings and the continually deepening knowledge of his subject that this intensive, almost microscopic, focus produces are all that interest him.

Elick provided many of the specimens for the artist, who grew them in his garden in Yorkshire, England, in order to study them and draw them from life. Each plant portrait was true to scale. Booth's botanical paintings were remarkably accurate, including depictions of Japanese plant habitats that the artist himself had never seen.
Hunt Exhibition: Japonica Magnifica: Paintings by Raymond Booth 1 April - 31 May 1996

Skipwith notes in the introduction that, atypically for botanical illustration, Booth's work is "unabashedly pictoral"; it most often places its subjects (flowers, trees, birds, squirrels, owls, etc.) within recognisably forest-like settings, which may bear some resemblance to the artist's garden in Leeds. Publisher's Weekly - about an Artist's Garden 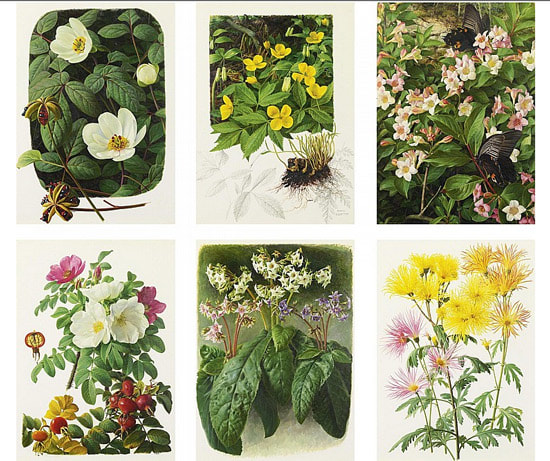 ​Exhibitions of his paintings are still held on a regular basis. They are almost always a mix of his natural history and botanical paintings.

In her first book, Shirley Sherwood tells a story of how she was introduced to his work by queuing on a chilly pavement outside the Fine Art Society at 7.30am in the morning - and was still sixteenth in line to buy one of his paintings!  Alan and Jane Clark were also fans and queued for his work. Patricia Cornwell, the noted thriller writer and collector was also a fan and bought a number of his works at the retrospective at Leeds Art Gallery.
For ALL ENQUIRIES about his available artwork
​please contact either:
the Fine Art Society in London or the Fine Art Society in Edinburgh

This is an interview with Peyton Skipworth - who is sitting in the exhibition "Raymond Booth 1929 - 2015: Detailing Nature" at the Watts Gallery in Surrey.

A Timeline of Paintings
​