This page is an introduction to Pandora Sellars (1936-2017).
Pandora Sellars is widely considered to be a contemporary equivalent to the botanical masters of the past
​and one of the top botanical painters of all time.

About Pandora Sellars - a summary
​

1936 - Pandora St. Christopher Brace was born on 25 August 1936 in Hereford and was brought up in a hamlet in a very rural area of Herefordshire between the Wye Valley and the Black Mountains. She grew up loving nature, collected and pressed the wild flowers she found and started drawing and painting plants as a child.

She subsequently studied at Hereford and Cheltenham Schools of Art, followed by a teaching diploma from the Manchester College of Art - and became an art teacher, 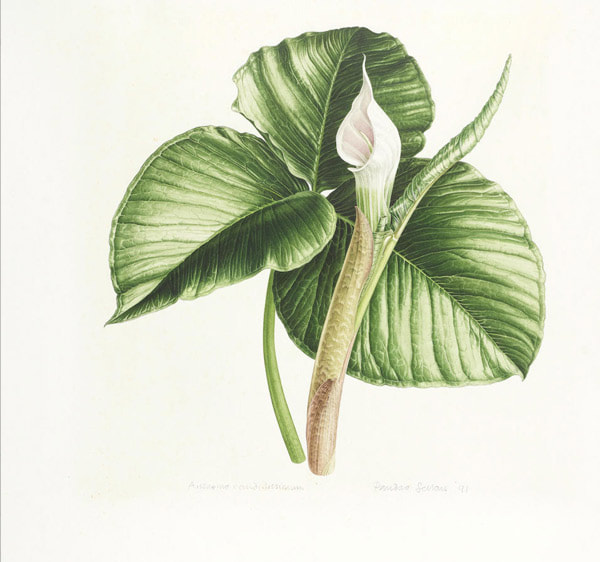 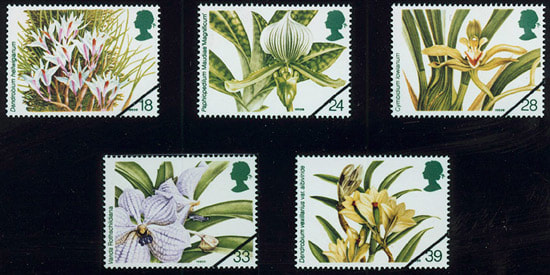 Five stamps issued to commemorate the 14th World Orchid Conference at the Scottish Exhibition and Conference Centre in April 1993. They used crops of paintings of orchids by pandora Sellars

PUBLICATIONS: Display of paintings of orchids for stamps and the three botanical books that she illustrated (at the exhibition at Kew Gardens)
2018-2019 - Botanical Theatre: The Art of Pandora Sellars (1936-2017)​
A retrospective exhibition of he paintings at the Shirley Sherwood Gallery of Botanical Art at Kew Gardens was visited by botanical artists from all over the UK and the world. 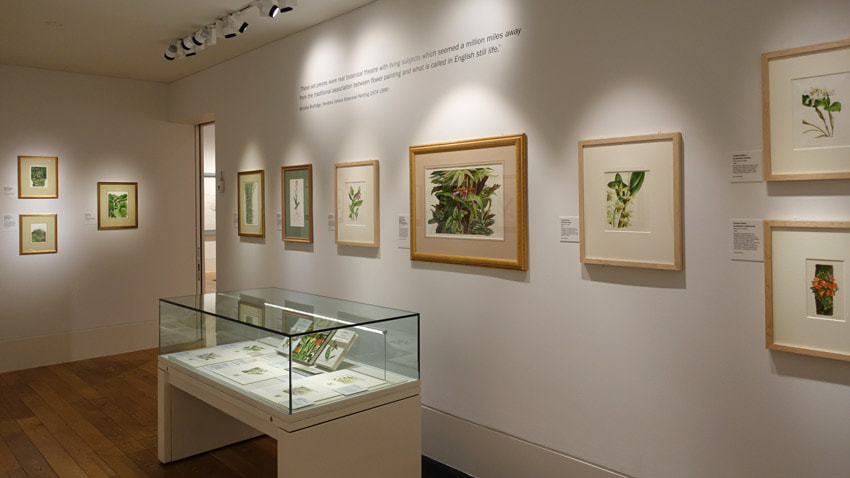 View of "Botanical Theatre" Exhibition at the Shirley Sherwood Gallery 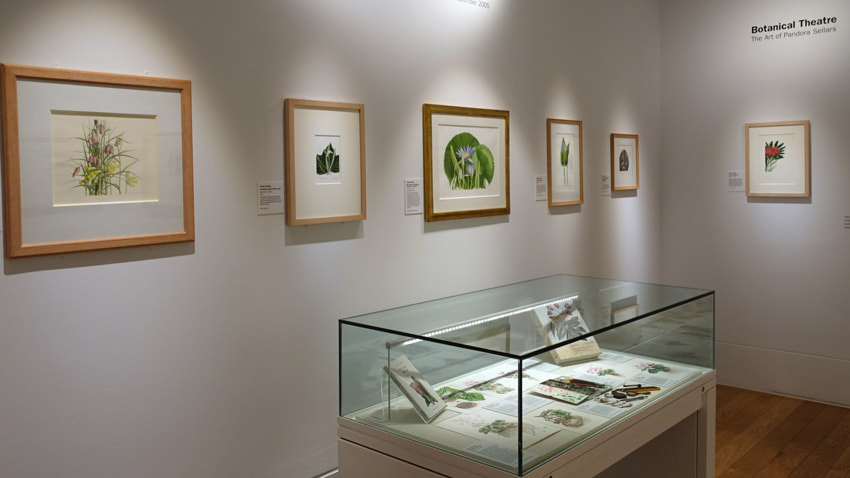 All who knew her personally held her in the very highest esteem, for her kindness and generosity as well as her exceptional talent and dedication to botanical art as an artist, teacher, mentor, colleague and friend.

The tributes to Pandora on her death bear witness to the very high regard people had for the woman, the artist, the art teacher and her art - and are listed at the end of this page.  See MORE TRIBUTES section below.

​At Kew, Pandora's death was marked by an article and also by a commemorative tribute in the Library Reading Room in the Kew Herbarium Building 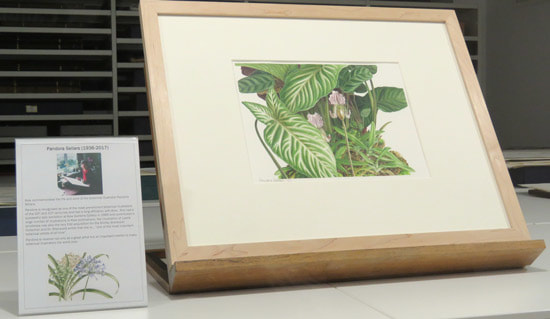 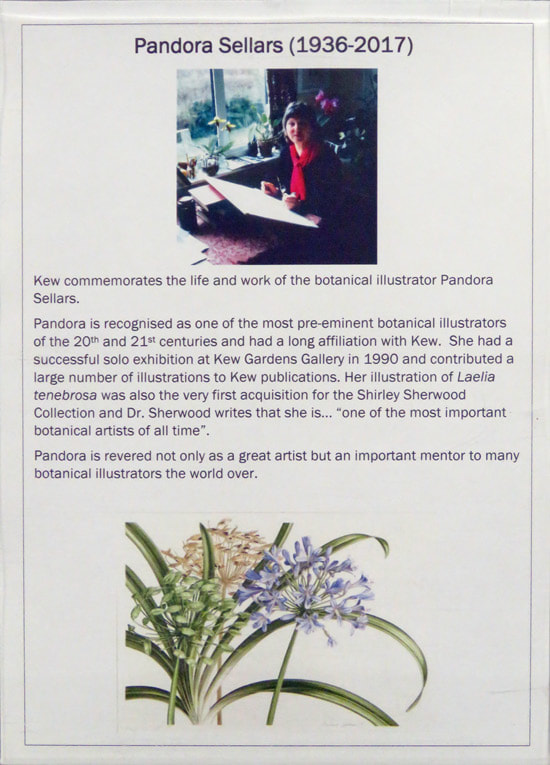 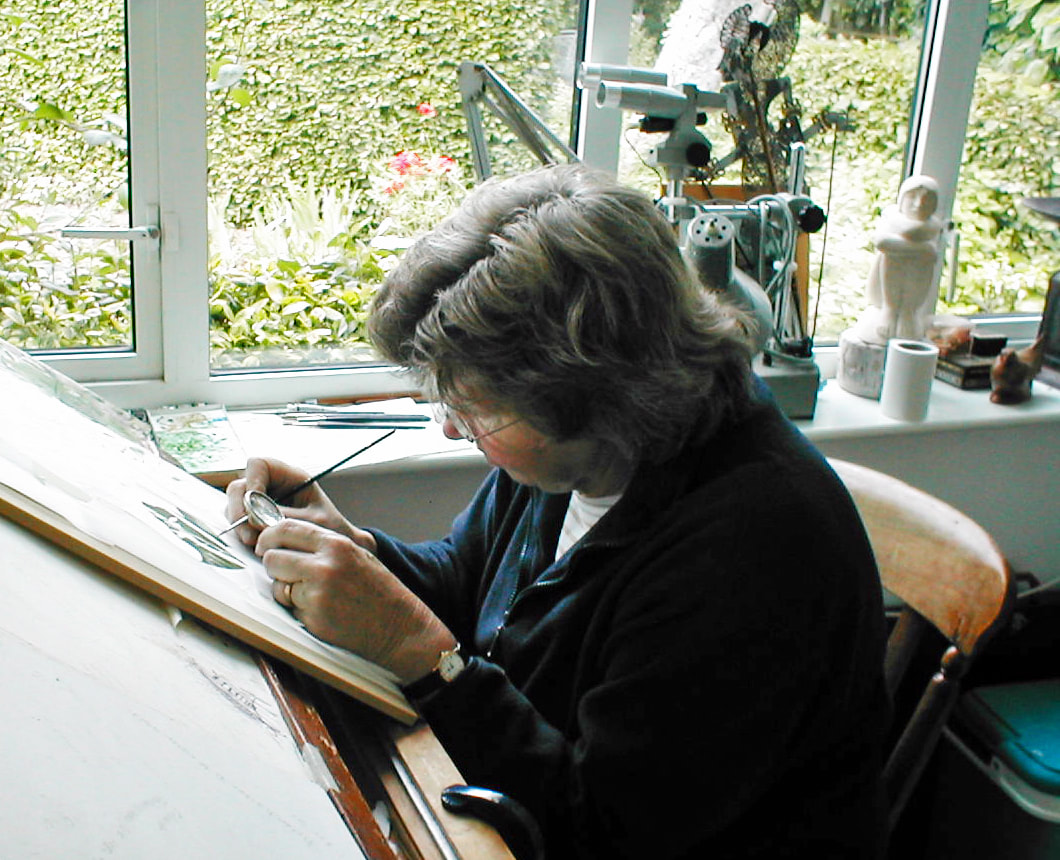 Pandora Sellars painting in her studio in later life. Note the size of her magnifier. (Photo courtesy of Margaret Best)

Exhibitions of Botanical Art - including paintings by Pandora Sellars
​

An Inventory of Paintings by Pandora Sellars
​

This is a wonderfully composed work, showing her early training asa designer. Each green-golf slipper orchid trails a pair of twisted brown petals and the painting is executed with unnerving perfection down to the finest hairs on the stem which are hardly visible except under a magnifying glass.
Shirley Sherwood in 'A Passion for Plants'

1984
1984
18 colour Plates published in Flora of Jersey - in this series she focused on one of the classical reasons for botanical painting, the recording of plants associated with and found in a very specific geographical area and published in a scientific book about the flora of that area - in this case the Island of Jersey in the Channel Islands.
1985-7
The following are plates in The Genus Paphiopedilum by Phillip Cribb - published as a Kew Magazine Monograph in 1987.
Of the 56 colour plates in the book, Pandora contributed nearly half - 26 plates in total. ​At least some of the plates were originally published in the Kew Magazine at an earlier date.
1989
The 1990s 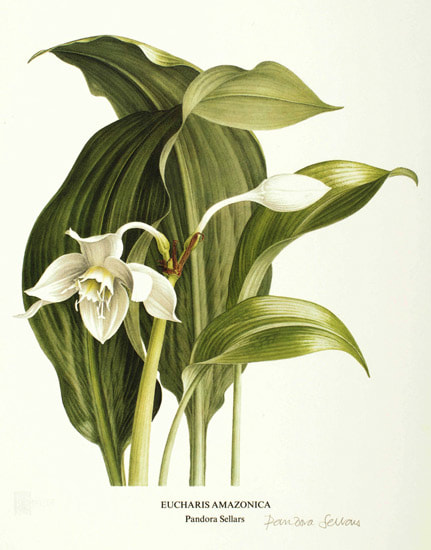 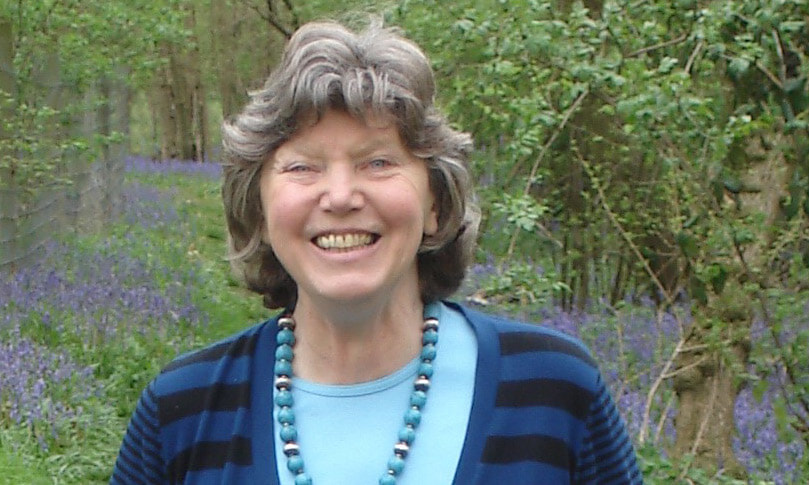 Pandora Sellars and bluebells in 2008

Those who knew and/or met Pandora
​

Those who own her work
​

Although I sadly never met her, I am the proud owner of one of her watercolours, which I treasure.  Some years ago she had an exhibition at Kew.  By the time I got there seemingly everything had been snapped up.  I happened to look behind a door.   My lucky day.   A perfectly beautiful little painting of hazelnuts, and no red spot.   It hangs in my bedroom, and gives me so much pleasure.  A wonderful artist.
Jessica Tcherepnine (botanical artist and art collector)

Those taught by Pandora
​

Those influenced by Pandora - and who saw her work in person
​

Many years ago when I set out to try a career in fashion, I immediately began to dream of a life less stressful, that would offer me the chance to get back to drawing and painting, Pandora's work gave me that solution. I found the inspirational work of Pandora Sellers by chance; I discovered a fig growing wild in a piece of waste land near where I lived in London and painted it with such enthusiasm that my boyfriend (now husband) bought me a book by Shirley Sherwood to celebrate my new found painting passion. In this book I saw Pandora's art and fell head over heels in love with the precision and artistry. Pandora was the queen of composition even her signature displayed her creativity; I fell in love with her work and it set me on a path to seek my own style of botanical painting.
I shall be forever grateful. Dear Pandora rest in peace, you were an inspiration to so many.
Billy Showell

Books typically included her illustrations and those of other people too.