Find out about the roots of botanical art in Asia - in China, India, Japan, Korea and Thailand

...flower painting as in independent art, untainted by medical or other practical considerations, began in China as early as the seventh or eighth century AD and was carried on with enthusiasm through these centuries when, in the West, Nature was still an object of mistrust or even fear
​
Wilfrid Blunt (The Art of Botanical Illustration' - West and East)

"To be without method is deplorable, but to depend entirely on method is worse."
(Lu Ch'ai (Wang Kai) 17th century Master of Chinese brush painting

These are:
Six principles of Chinese Painting

How paintings of flowers and plants were constructed was also influenced by the earliest record of Chinese art Theory - the six principles of chinese painting. This relates to the Gu Huapin Lu (“Classified Record of Painters of Former Times”) by Xie He (a.k.a. Hsieh Ho) published in the 6th century.

In this he rates 27 painters in three classes of descending merit, each with three subdivisions. He explains the criteria for the rating and ranking as the six principles.

Chinese painters of plants and flowers
​

One of the problems with identifying artists is the different names attributed to them over time. Developing a list of important flower painters will take time! 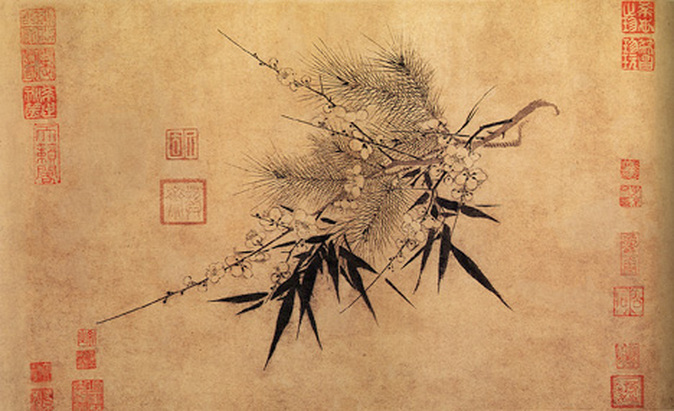 Three friends of Winter (pine, plum blossom and bamboo) by Zhao Mengjian 趙孟堅 (Song dynasty) ink on paper. These three plants are known for known for their ability to withstand coldness
Quing Dynasty (1636 - 1912) also known as 'Lang Shining'
​John Reeves (1774–1856)
Appointed as a tea inspector in 1808 and started to travel to China. He met with and was appointed by Sir Joseph Banks to be one of his many collectors.  he was also He was also a keen amateur naturalist and artist and also collected drawings! The link provides a detailed explanation of how the collection came about.

The commissioned paintings were executed on thick, cream English watercolour paper, predominantly produced by Whatman and made from cotton rag, measuring at least 48 x 36cm.
The Plantsman

Plants have always been important to the practice of Ayurvedic medicine which is one of the world’s oldest medicinal systems. However, unlike in the west, the practice of medicine does not seem to have triggered the development of botanical illustration to ensure plants are identified correctly.

There was no true botanical illustration until the time of the Mughal Emperors who were genuine nature lovers.
Mughal emperors commissioned botanical and ornithological studies from their court artists.

"This year [A.D. 1620], in the little garden of the palace and on the roof of the chief mosque, the tulips blossomed luxuriantly. There are many blue jessamines in the gardens, and the white jessamines that the people of India call chambili are sweet-scented.... I saw several sorts of red roses: one is specially sweet-scented.... The flowers that are seen in the territories of Kashmir are beyond all calculation. Those that Nadir al-casr Ustad Mansur has painted are more than 100"
Jahangir, Tuzuk, II, p. 145

Company School paintings are in the collections of:

An exhibition of paintings by Indian artists working under commission of officials of the East India Company has been borrowed from four British institutions: British Museum (Natural History),
​

Artists trained in the Mughal tradition adapted their skills for the purpose of recording, with the standard of accuracy demanded by European Scientists, the potential plant resources of a territory under British Influence. The paintings represent a confluence of styles of East and West. They are largely unknown and have certainly have never been shown in America
Bulletin of the Hunt Institute for Botanical Documentation | Carnegie Mellon University Fall 1979

Teams of botanical artists were employed at the East India Company gardens of Calcutta and Saharanour.
Often we do not know the names of the artists. Collections of paintings by Company School artists are often known by the name of the collector. However certain patrons employed the same artists and we know their names.
Bhawani Das
One of three artists employed by Mary Impey - wife of Elijah Impey, the first Chief Justice of the Supreme Court, Fort William - who commissioned over three hundred paintings.

Rungiah and Govindoo (mid 19th century)
These two Indian artists were commissioned to make several thousand botanical drawings by Robert Wight (1796-1872) a surgeon with the East India Company. Some 700 of these can be found in the collections of the Royal Botanical Garden Edinburgh (RGBE)
Robert Wight and the Botanical Drawings of Rungiah and Govindoo
by Henry J. Noltie ​
A trilogy of volumes in a slipcase is the second in a series of illustrated works devoted to collections of botanical drawings made by Indian artists for Scottish surgeon-botanists, held in the library of the Royal Botanic Garden Edinburgh.

The Cleghorn Collection (RBGE)
Several thousand botanical drawings were commissioned in India, from Indian artists, by Hugh Cleghorn (1820-1895).
​
The Roxburgh Icones (RBGE)
William Roxburgh (1751-1815) was known as the ‘Father of Indian Botany’. In India he commissioned about 2500 drawings of Indian plants from a team of Indian artists. These are known as the ‘Roxburgh Icones’. RGBE have a a set of about 500 extremely fine, partially coloured, ink copies based on the original Roxburgh Icones, made in the Calcutta Botanic Garden 1815-20. The names of the botanical artists employed by Roxburgh are not known.
The Cleghorn Collection: South Indian Botanical Drawings 1845 to 1860
​from the Royal Botanic Garden Edinburgh
by Henry J. Noltie

The Royal Botanic Garden in Edinburgh has held a series of major exhibitions of botanical drawings and paintings of Company School paintings and drawings in the RBGE gallery at Inverleith House:
Dapuri Drawings: Alexander Gibson & the Bombay Botanic Gardens
by Henry J. Noltie ​

​A book about the watercolour paintings of plants grown in the botanic gardens in Bombay in the middle of the 19th century. These were commissioned by Alexander Gibson, an East India Company surgeon. Gibson wrote the Bombay Flora with Nicholas Dalzell.

The Japanese Flora was first described - in part - by:

More Famous Botanical Artists of the Past