This is the ONLY ONLINE ARCHIVE Record of all the Botanical Art Exhibitions ​
held at
The Shirley Sherwood Gallery of Botanical Art
at the Royal Botanical Gardens, Kew. 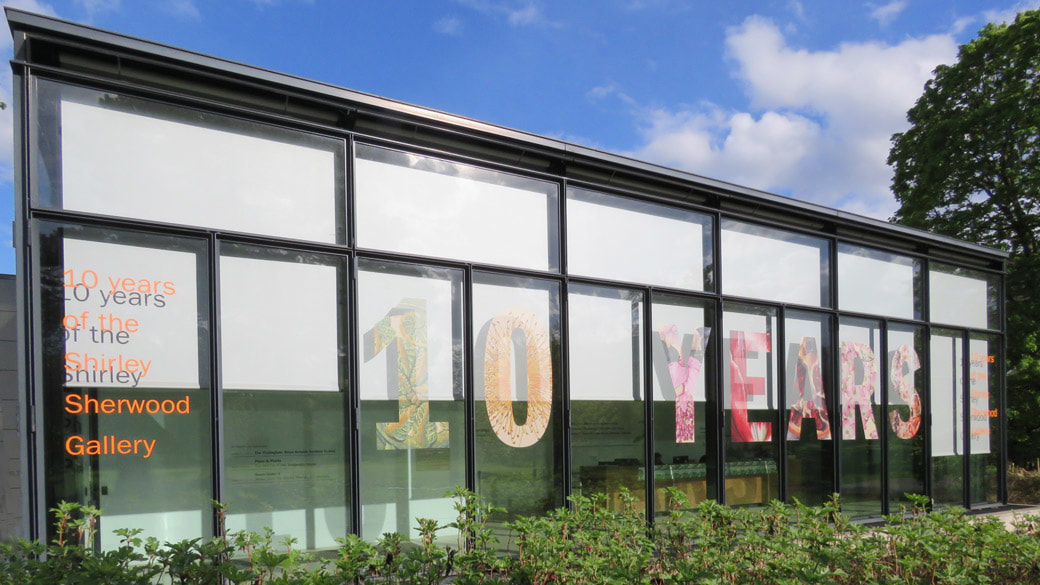 In April 2018, the Shirley Sherwood Gallery celebrated its 10th Anniversary - and the one millionth visitor arrived in September 2018

About Dr Shirley Sherwood - the Collection and the Gallery
​

First a few words about Shirley Sherwood - the woman who has generated a revival of interest in botanical art across the world since 1990 when she started to collect seriously.

​The Veitch Memorial Medal may be awarded annually to persons of any nationality who have made an outstanding contribution to the advancement of the art, science or practice of horticulture.
RHS People Awards (website)

​This book is a celebration of the Shirley Sherwood Collection of contemporary botanical art
The collection includes some of the 1,000+ paintings which Dr Shirley Sherwood has collected over a period of 30 years. It is considered the most important private collection of its kind in the world.
​
​About the author
Dr Shirley Sherwood trained as a botanist at The University of Oxford and subsequently earned her D.Phil as part of the research team of Nobel Prize winner Sir James Black, whose group discovered Tagamet. She began collecting botanical art in 1990 and in that time has travelled around the world looking for botanical artists and their work, excited by the expanding field of this old/new discipline. In doing so, she has built the most important private contemporary botanical art collection in the world, comprising over 1,000 works by 303 artists from 36 countries. Dr Sherwood was awarded a Veitch Memorial Medal by the RHS in 2004 and in 2012 received an OBE for services to botanical art.  She and her family also helped fund the Shirley Sherwood Gallery of Botanical Art at the Royal Botanic Gardens, Kew - the first gallery of botanical art in the world. (see the Archive of Botanical Art Exhibitions in the Gallery)
A Passion for Plants Contemporary Botanical Masterworks
by Shirley Sherwood

Why an Archive of Past Exhibitions?
​

Contemporary Botanical Artists: The Shirley Sherwood Collection
by Shirley Sherwood
As you scroll down the page, you move back in time through the various exhibitions
​to 19th April 2008 when the Gallery opened

Viewing the exhibitions in 2020/21 was very much constrained by Government decisions on lockdown and tiers.  These two exhibitions were postponed from a planned opening earlier in the year and were open only briefly.
Jan Hendrix: Paradise Lost
Author: Jan Hendrix
RECOMMENDED: This is an excellent book for all those who like their botanical art to be both grounded in the history of botany and at the same time to have a very contemporary edge. It's packed full of images of artwork in the exhibition and sources for its development which root it in the past as well as the present. His artwork encompasses printmaking, weaving, metal works, enamel and watercolour.
Supporting texts that contextualise the work of the artist by Art Historian Dawn Ades, CEO of the Bundanon Trust Deborah Ely, and filmmaker Michael Leggett. ​Plus a foreword by Kew Director Richard Deverell.

WINTER 2018/19: The Gallery is currently hosting ​four exhibitions running from 6 October 2018 until 17 March 2019: The first two relate to the 800th anniversary of the Charter of the Forest in 1218
See my blog post Four new botanical art exhibitions at the Shirley Sherwood Gallery for more details and opening hours during this period.
A Legacy of Ancient Oaks by Mark Frith with text by Emma Crichton-Miller 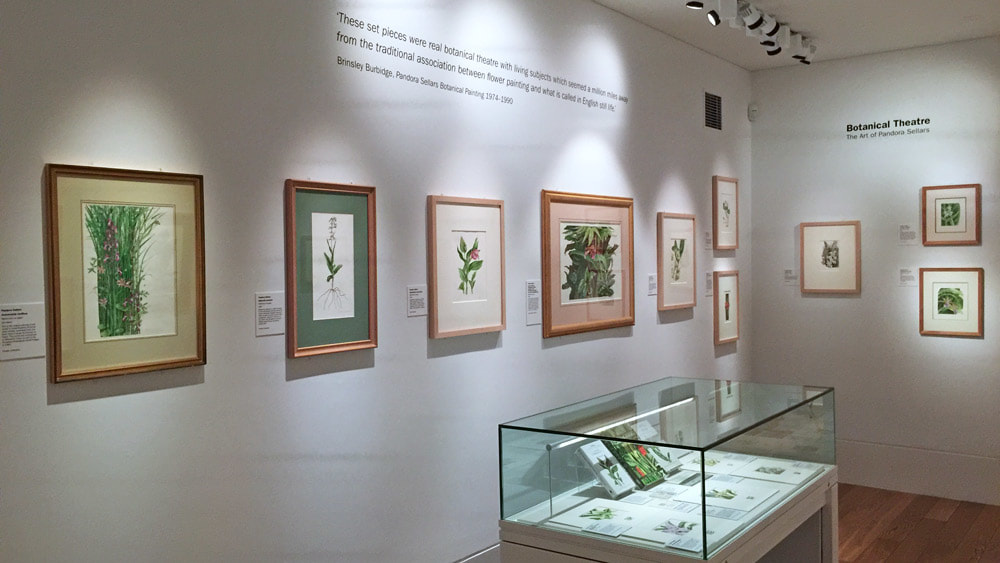 View of paintings by Pandora Sellars in the "Botanical Theatre: The Art of Pandora Sellars" exhibited at Kew in 2018/19. It's a retrospective following her death in May 2017.
Rankafu: Orchid Print Album by Stephen Kirby, Toshikazu Doi, Toru Otsuka
SPRING 2018: There were three exhibitions which opened in Spring 2018.

View of part of the exhibition by the Florilegium Society of the Royal Botanic Garden, Sydney
Down Under II: Works from the Shirley Sherwood Collection
Dates: 31 March to 16 September 2018 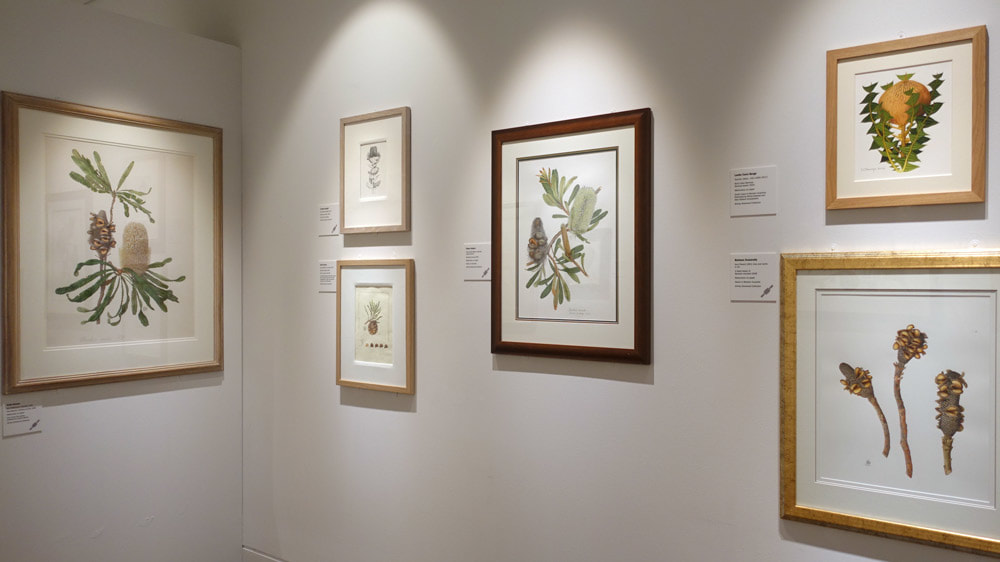 "Banksia Corner" in the Down Under II Exhibition - includes a Banksia Painting by the great Celia Rosser - who The Banksias,, a three-volume series of monographs (1981, 1988 and 2000) containing watercolour paintings of every Banksia species
Plans and Plants: The making of the Temperate House
Dates: 31 March to 16 September 2018
​ 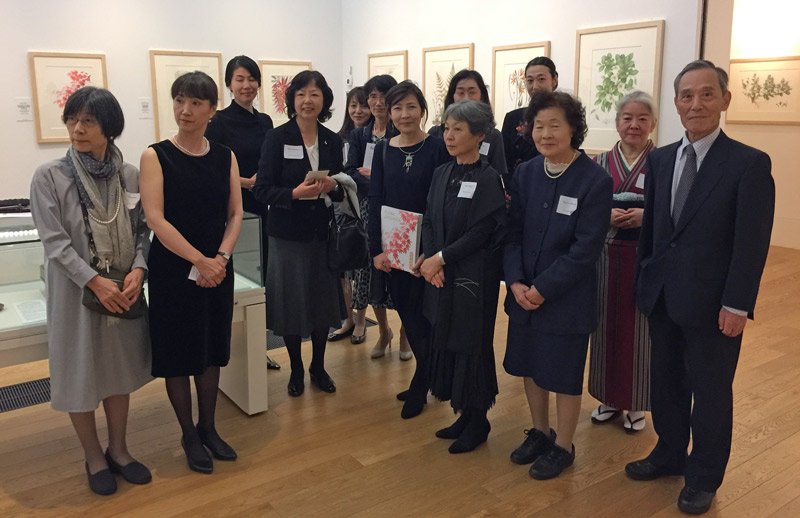 Most of the Japanese artists who contributed contemporary botanical art to this exhibition.
Tours of the exhibition were given by co-curator Masumi Yamanaka. ​This is an article about preparing the works for exhibition - Flora Japonica exhibition installation 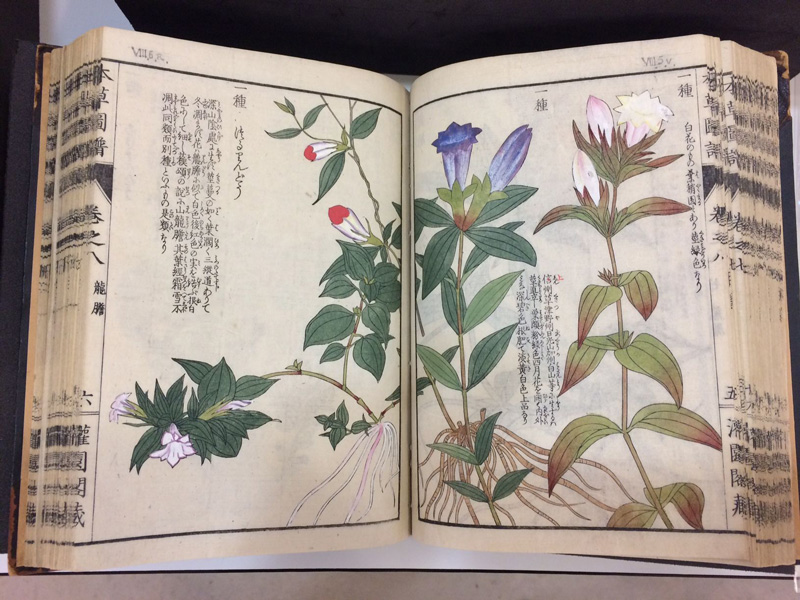 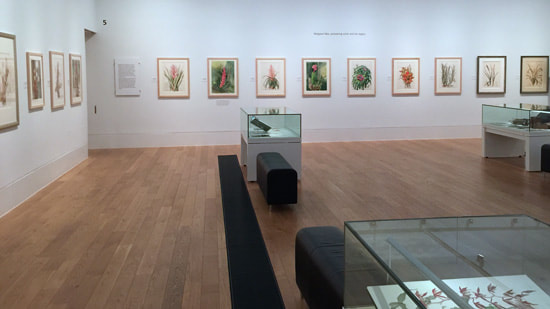 Main Gallery shot of the exhibition "Brazil: a powerhouse of plants: Margaret Mee, pioneering artist and her legacy"

2015 was a good year for botanical art exhibitions. There were
Nature's Bounty: paintings from the Shirley Sherwood Collection
Shirley Sherwood Gallery: 29 August 2015 to 31 January 2016, 10am to 5.30pm 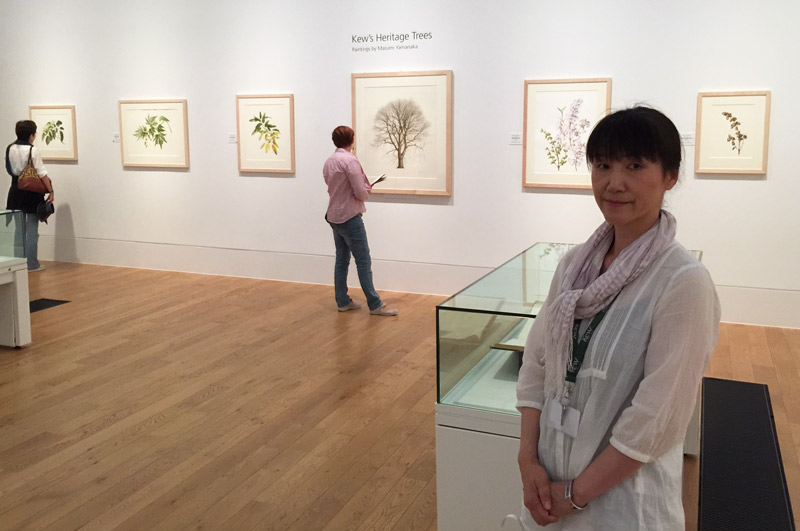 Masumi Yamanaka with her paintings in the main gallery of the Shirley Sherwood Gallery of Botanical Art
Treasured Trees
​by Masumi Yamanaka, Martyn Rix and Christina Harrison 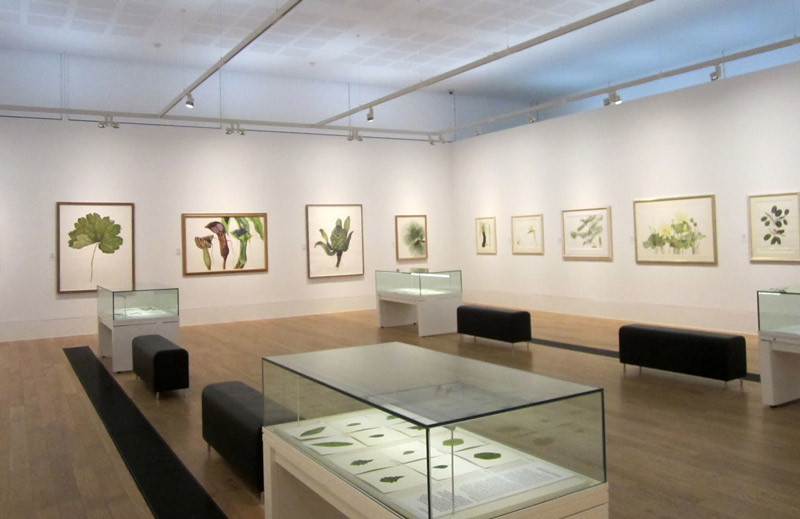 A view of the main gallery for 'Botanical Art in the 21st Century' (courtesy of Jess Shepherd)
This exhibition also included: 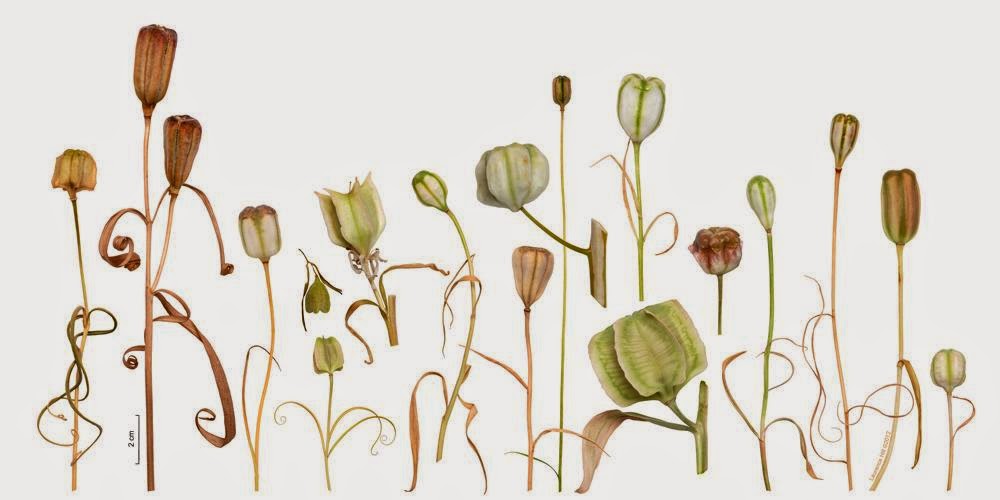 View of "Botanicals - Environmental Expressions in Art" in the Shirley Sherwood Gallery
Botanicals - Environmental Expressions in Art
By James J. White and Lugene B. Bruno with essays by Isaac M. Sutton, Susan Frei Nathan and Alice Marcus Krieg.
Black and White, in Colour
12 October 2013 to 5 January 2014
Rory McEwen - The Colours Of Reality
11 May to 22 September 2013
Rory McEwen: The Colours of Reality
by Martyn Rix
The McEwen Legacy - Artists influenced by him in the Shirley Sherwood Collection
​13 April 2013 - January 2014

The exhibition also had a very informative exhibition in the peripheral link gallery featuring paintings  in the Shirley Sherwood Collection by artists who had seen his work and had been inspired and/or influenced by it.

Plants in Peril was the overarching title for a number of exhibitions with the theme of plants in peril. ​The exhibition featured 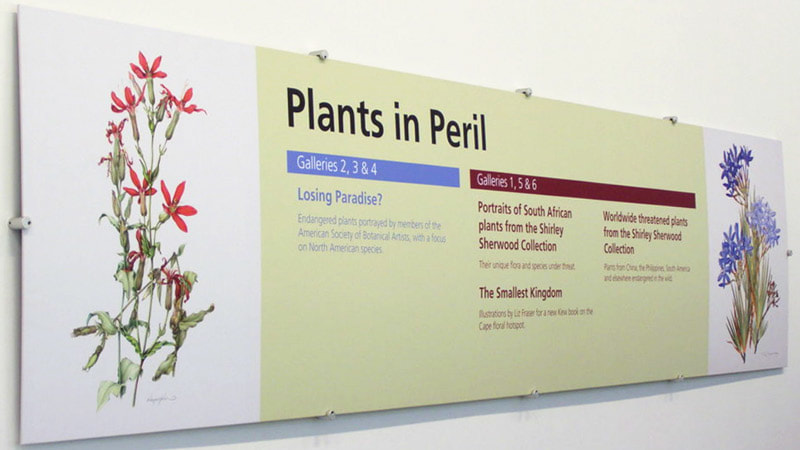 The Plants in Peril Exhibition Banner
The Smallest Kingdom
June - October 2011
​​
Also on display were some of the original paintings pf plants in South Africa - from the book ‘The Smallest Kingdom’, by Mike Fraser with illustrations by Liz Fraser, which details the intricate interlinking life styles of the plants and animals of the Cape.
​The Smallest Kingdom: Plants and Plant Collectors at the Cape of Good Hope
by Mike and Liz Fraser
From Eye to hand - Kew Artists

Paintings in this exhibition included a timeline of works were selected from the Kew Art Collection which contains over 200,000 items. Works includes paintings by some of the undisputed masters of botanical art and are by artists who flourished from the mid eighteenth century, through to today. Publications and archive material displayed revealed a variety of style and subject. Some pieces wereproduced for publication, while other examples were made to aid identification, and record. 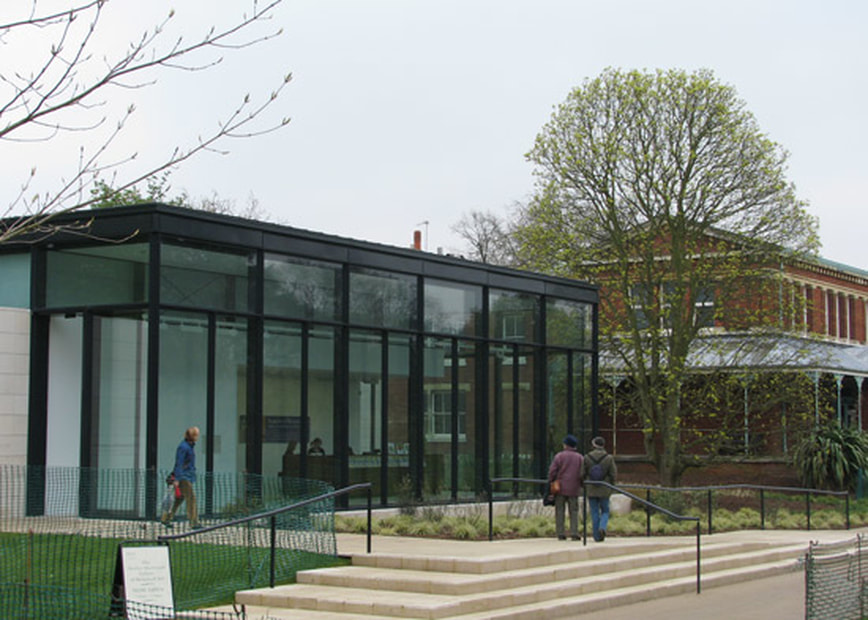