Contemporary botanical artists
​and illustrators
​in the UK

This page highlights artists and illustrators
creating contemporary botanical art and illustration of distinction
who are based or born in the UK - England, Scotland, Wales and Northern Ireland.
Banner image: the view from the balcony of the 2016 RHS Botanical Art Show. It's an international exhibition which includes  a lot of top quality UK botanical artists,

Watercolour painters who are best known for their work in another medium are highlighted below with a crossreference to the other media sections below.
Sarah Adams GM (2004)
​Awarded a Gold Medal by the Royal Horticultural Society for a series of 8 paintings of Rhododendrons. Studied studied Graphic Design at Medway College of Design and Wildlife Illustration Course at the Dyfed College of Art in Carmarthen. Worked as a commercial illustrator of plants for publishers, packaging and the advertising industry. Her work is in many private collections and has been sold in auctions by Christies and Sothebys.
REFERENCE:
An Approach to Botanical Painting by Anne-Marie and Donn Evans
A Coming of Age: Celebrating 18 Years of Botanical Painting for the Eden Project
by The Eden Florilegium Society (Author: Ros Franklin)
Ros Franklin GM (2015), FLS, FEPFS ASBA
Based in Hampshire. Diploma in Botanical Painting & Illustration with Merit from the English Gardening School. Joined the Eden Project Florilegium Society in 2004 and became Chairman in 2012; elected a Fellow of The Linnean Society of London (FLS) in 2013. Member of RNGS Florilegium Society. GM in 2015 for "Arisaemas for the Sheltered Garden or Greenhouse".  Author of A Coming of Age: Celebrating 18 Years of Botanical Painting for the Eden Project. Work in the RHS Lindley Library, Eden Florilegium, RBGS Florilegium collection and Private Collections. Has taught botanical art since 2008. Exhibited nationally and internationally ('Botanica' at RBGS 2016-2018; SBA at the Palmengarten 2016; and Real Jardin Botanico in Madrid in 2018).
A Wild Plant Year The History, Folklore and Uses of Britain's Flora by Christina Hart-Davies GM
The Kew Book of Botanical Illustration by Christabel King
​Lizabeth Leech
​A botanist, a botanical artist and illustrator and a botanical author. She is also an experienced tutor and teacher of botany, ecology and biology. She is a Fellow of the Hampton Court Palace Florilegium Society (HCPFS) and is their Honorary Botanist (botanical advisor). She is also a member of the Institute for Analytical Plant Illustration (IAPI) and the American Society of Botanical Artists (ASBA).
​Botany for Artists by Lizabeth Leech
Janie Pirie GM - see Pencil Artists below

I’ve never liked being in a tradition. So I have tried hard to see a different view of a plant
Rosie Sanders

Rosie Sanders' Flowers: A Celebration of Botanical Art by Rosie Sanders
Gael Sellwood VPSBA GM (2014)
Gael is Vice President of the SBA. She's a qualified teacher and botanical illustrator who paints in watercolour and sometimes on vellum. She exhibited at the Hunt in 2013 and in 2014 she won an RHS Gold Medal for ‘hydrangea macrophylla in autumn and winter’. In 2018, her first book was published about the plants she grows in her garden - it's a contemporary take on a florilegium.
Billy Showell's Botanical Painting in Watercolour by Billy Showell
​​​Laura Silburn GM (2013, 2014, 2018)
Botanical artist working in Cornwall. She is a Fellow of the Eden Project Florilegium Society. Tutor in botanical painting and drawing at the Eden Project. To date Laura has won three Gold Medals from the RHS:​Her work is in the collection of the RHS Lindley Library, the Transylvania Florilegium, The Florilegium Society of the Royal Botanic Garden, Sydney, the  and the Shirley Sherwood Collection and she has been invited to exhibit at the Hunt Institute. Her work is also featured in 'The Illustrated College Herbal: Plants from the Pharmacopoea Londinensis of 1618' published by the Royal College of Physicians 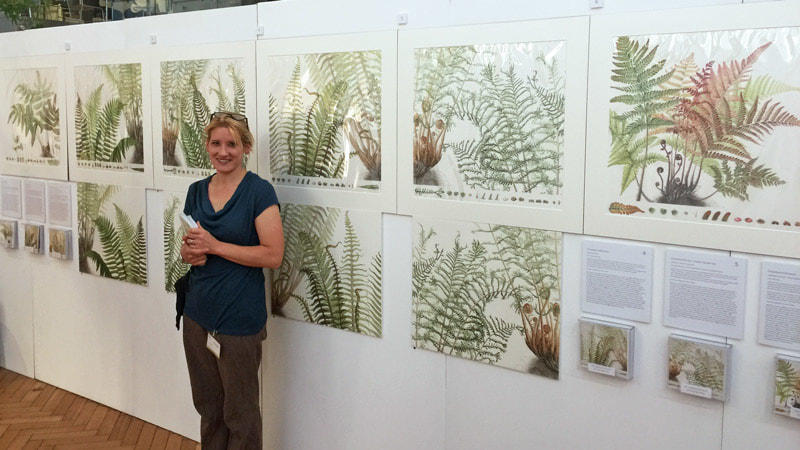 Laura Silburn with her RHS 2018 exhibit "GM Dryopteris: species and cultivars of Dryopteris ferns with an Award of Garden Merit"> The Best Painting in Show award was for the one on the extreme right.
Niki Simpson GM (painting)  1998
Degree with honours in Environmental Science (including 3 years of Botany). Subsequently worked for the RHS Botany Department at RHS Wisley, initially as Administrator for the RHS Horticultural Database and subsequently managing the RHS Botany image collection. Fellow of the Linnean Society. Won an RHS Gold Medal in 1998 for her exhibit of watercolour paintings. Commissioned to produce illustrations for the RHS New Plantsman.  Taught short courses in Botanical Art for the RHS Rosemoor in Devon for many years. Following a Queen Elizabeth Scholarship Trust award in 2004, Niki has experimented with the use of digital techniques for botanical illustration - and two more Gold Medals. See Botanical Photography below. 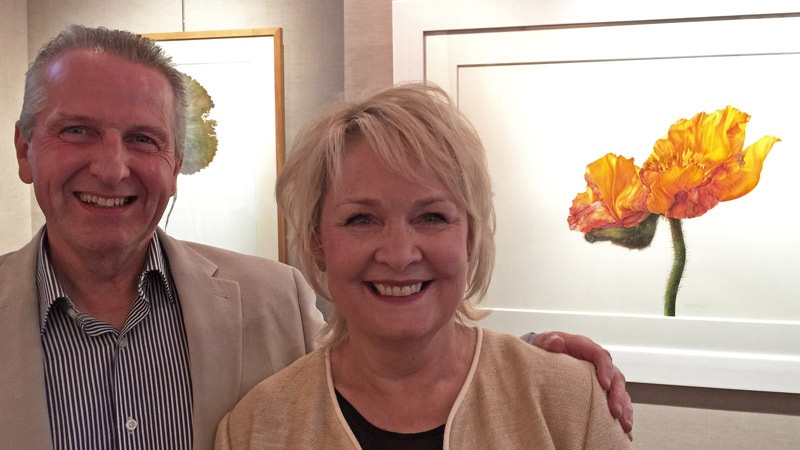 "Bryan Poole ...has the gift to be able to combine traditional methods of illustration and reproduction with a very modern approach to botanical art and design..."
Dr Christopher Grey-Wilson, Past Editor of Curtis' Botanical Magazine

Professional Botanical Illustrators and Artists working in Pen and Ink
​ 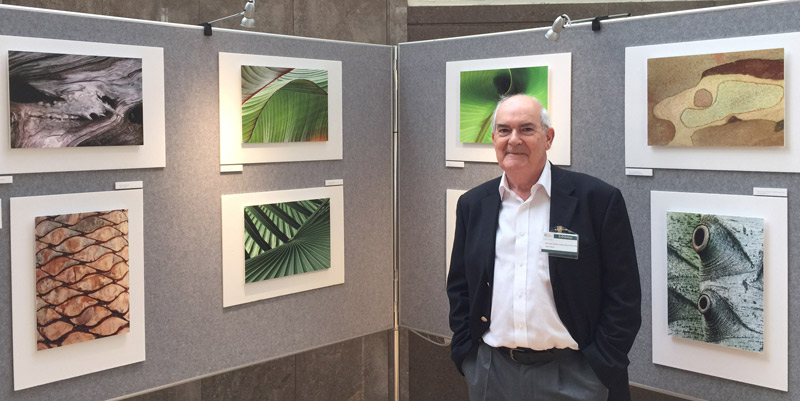 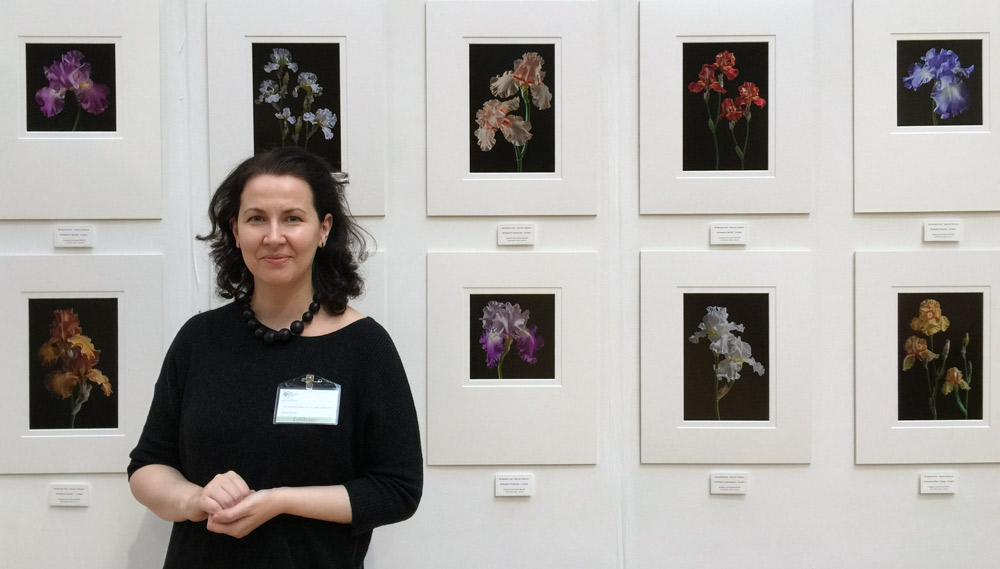